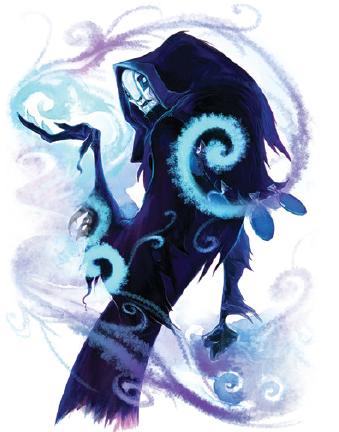 Future’s curtain unravelled itself to reveal a nightmare of endless repetition, a senseless squander of organic material. The suffering of human billions makes its entrance into him through the gateway of compassion…

And so it begins again… it seems The Dustman has found a new method of delivering his horrors into the world of Sleepers. I truly thought I’d seen the last of him and the entity he represents but with a glimpse of those blue spiral eyes it all came flooding back. What was it all for? My allies, my friends, dead to save this world, or so we thought, and now I wonder. Could this just be a human harvest? A feeding? Or is it something deeper again?

It started with a simple call, reports of melting mail boxes and chaos near the Jewelry District by the Point Street Bridge. Perhaps an Awakening or something supernatural? What we found, instead, was just a man. Freya was able to calm him and guide him away from the scene but there was so much damage done already… I don’t see how this can be contained. From the first moment I saw him I was desperate to get him away from the scene. I needed to know where he got it, how he got it.

If we can find another source… I just pray I’m strong enough to resist.

We got the man back to the mansion and interviewed him. In short, it seems that something has changed. Somehow the drug is being delivered via “health drink” called Spiralina and the man was drinking it to improve his performance. It was hard enough stopping a drug that people had to drop in their eyes but if it can be delivered to unsuspecting people as well the scale could be unfathomable.

We did learn, however, where it came from. The new pedestrian bridge in Providence, the same place where we were invited to a Fey party in the Hedge on New Years Eve. It seems the Fey are involved, somehow, Lawrence described a jumpy man claiming to represent the health food company leaving the product at the bridge. Perhaps the Hedge is a gateway to Ruk or perhaps Nakarand has moved elsewhere. With the Fey involved it’s impossible to predict what motivations might be in play.

I’ve told the rest of the Threads much of what I know about The Estate and the drug known as Spiral. Unfortunately, that’s precious little. I have no idea what the Estate will do if they find out Spiral is back. I don’t know what they’ll do if they track me down. It’s not like I turned against them… I just left. After all I’d done and all I’d sacrificed, shouldn’t that be allowed? Can’t I be left alone?

I don’t even know who I am. Who is Wassily Kandusky? Is he dead? Who was Aberanth Karminov and how did he become The Last Messiah? I’ve tried to learn what I can through normal means and all the while I’ve ignored the most obvious source of truth. I haven’t dared to look at it since the night I was born. The night I died. The night I awakened, but I can ignore it no longer.

I have to return to the Lattice. Perhaps there are still answers to be found in its depths…. I just hope I can find them without Spiral this time.

He is no longer obvious to himself – he touches his body in utter horror; this is you and so far do you extend and no farther. He carries a meal within him, yesterday it was a beast that could itself dash around, now I suck it up and make it part of me, and where do I begin and end?”

I'm sorry, but we no longer support this web browser. Please upgrade your browser or install Chrome or Firefox to enjoy the full functionality of this site.